Among UA’s youngest schools and colleges, the School of Social Work is celebrating five decades of excellence in social work education.

Efforts to establish a school of social work on the campus of The University of Alabama began in 1965 with a feasibility study. The study, conducted by the Council on Social Work Education, examined the resources and need for such a school in Alabama. Because of the study and a well-coordinated campaign by a citizens’ committee of the National Association of Social Workers – Alabama Chapter, the state Legislature enacted a law at its 1965 spring session authorizing the University to establish a graduate school of social work. The new law charged the School with addressing the state’s critical shortage of and pressing need for professionally trained social workers.

“On the day the bill was established, all of the committee members were present and personally handed each state legislator a pink carnation as they came into the chamber,” said Jerry Eure, retired social work faculty member. 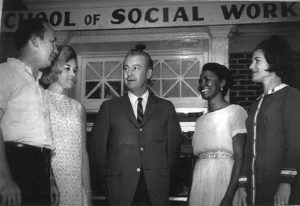 To prepare for the School, the University renovated Little Hall, a campus building constructed in 1915, to meet the specific requirements of social work education. At the time, the building, which faces University Boulevard and is just east of the UA President’s Mansion, contained an auditorium, classrooms, seminar rooms, a research laboratory, offices for members of the faculty and staff, a student lounge, and a library reading room.

Following the Little Hall’s renovation, the School’s first dean, Howard B. Gundy, was appointed in 1966 to oversee the School’s two-year program of classes and field instruction, leading to a Master of Social Work degree. He served as dean until 1971.

In 1967, the first 29 MSW students enrolled at The University of Alabama School of Social Work, beginning our long, rich history in social work education. The School was included on the Council on Social Work Education’s fall 1967 roster of schools working toward accreditation. The School’s MSW program earned accreditation in 1969, the same year the School’s first class of graduates received their master’s degrees.

After welcoming its first MSW class, the School experienced considerable growth. The School’s BSW program was approved in 1969 and placed within the School of Social Work in 1970.

“There is a deep feeling on the part of students that social change is necessary and that the field of social work offers relevant education,” Gundy told the Crimson White in a Sept. 28, 1970 news story on students’ interest in the field.

In 1974, the Council on Social Work Education accredited the BSW Program for the first time. A year later the School’s Doctor of Social Work (DSW) program was established. In 1992, the DSW  program was replaced with a PhD program. School faculty substantially revised the program after recognizing the need for increased emphasis on research within the social work profession. Today, our PhD Program focuses on preparing students as teachers and researchers for the social work profession. The PhD program is affiliated with the Group for the Advancement of Doctoral Education (GADE) in social work. 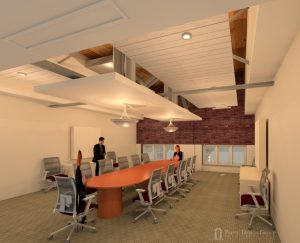 Our MSW program also has continued to grow and now includes a primarily online degree. Today, the School has awarded over 3,000 MSW degrees.

Under the leadership of the School’s seventh and current dean, Vikki L. Vandiver, SSW has continued to experience significant growth and progress. In September 2015, Montgomery-based Payne Design Group Architects, LLC was approved by The Board of Trustees of The University of Alabama to renovate Little Hall to meet the needs of today’s social work students. The expansive renovation of the 102-year-old school building began in spring 2016 and was the impetus for the School’s Restoring Our Past, Building Our Future initiative. The initiative allows alumni and supporters of the School to establish a permanent naming recognition in Little Hall.

In August 2017, the Little Hall renovation project was completed. For the School’s 50th anniversary, the school has incorporated the newly renovated building in celebration festivities for alumni, students, faculty and staff. See a list of our 50th anniversary events.

Mary Avis Todd was one of the founding faculty members of The University of Alabama School of Social Work, where she taught until her retirement in 1978. She had a compassion for others and a creative manner in which she met challenges. It took many others like Todd to establish the School of Work. Here are some of of individuals who helped us begin our 50-year and counting journey in social work education.

The University of Alabama School of Social Work is committed to making its web resources accessible to all users, and welcomes comments or suggestions on access improvements. If you are unable to access the contents of these documents, please contact (205) 348-7027 or ssw@ua.edu.