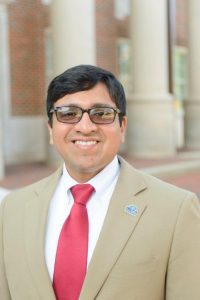 Established by CVA in 2013, the award is presented annually to a top supporter of the University’s veteran community. The honor is named for Col. David H. Pryce and Dr. Josephine Pryce, a professor in the School of Social Work.

Suclupe is a clinical social worker at the Tuscaloosa Veterans Affairs Medical Center and currently serves as the center’s program manager for the Veterans Integration To Academic Leadership (VITAL) initiative, a VA outreach program that assists student veterans with academic wellness and retention. At UA, Suclupe was involved in various leadership initiatives serving veterans. He served as CVA’s president and was selected as a Pat Tillman Scholar, and a Graduate Council Fellow.

Today, Suclupe serves on UA’s Division of Community Affairs Board of Advisors and UA’s Council on Community-Based Partnerships. He earned both his BSW and MSW degrees from The University of Alabama School of Social Work.

For more information about the VITAL program and student veteran services, email William.Suclupe@va.gov or call the University of Alabama Office of Veteran and Military Affairs at 205-348-0983.