The Social Times – Leading With Heart 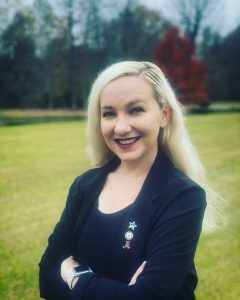 “Changing the world, bit by bit.” Kirsten Laha-Walsh is pioneering possibilities in the field of social work research.  A former military veteran and the caregiver and spouse of a military veteran who was injured in Operation Iraqi Freedom, Kirsten is passionate about supporting the needs of military veterans and their caregivers.

Kirsten chose to study at The University of Alabama in large part because she wanted to train under and alongside Dr. David Albright, a preeminent military social work researcher.  “I came to The University of Alabama to better myself as a researcher and really figure out what direction I wanted to go in.” Dr. Albright mentored Kirsten and helped her unlock her passion for advocacy and impacting public policy.  He challenged her with the notion that she had the power to change her mindset.  That challenge helped to ignite a fire within Kirsten that led her to pursue her interests and embark on the path less traveled in the hopes of making an impact.

As an LGBTQ woman married to a spouse who struggled through a challenging recovery after earning a purple heart during the Iraqi invasion, Kirsten understood that her story about her struggles could help others.  She decided to tackle a largely uncovered field of research and study the caregivers of military veterans who identify as transgender.  This work addresses the multitude of complex issues facing not only veterans, but the caregivers who love and support them.

As a result of her advocacy, Kirsten was selected as an Elizabeth Dole Foundation Caregiver Fellow and presently represents the state of Alabama.  Through this foundation, Kirsten is able to help caregivers of veterans through advocacy and support.  “The Foundation enables me to share my story and to support and inspire others.  Our stories can help pave the way for others so that they do not have to have the same experiences.”

Understanding that the beauty of the field of social work is the multitude of ways in which the profession can make an impact, Kirsten is presently harnessing that power as a member of a multi-disciplinary team that is working with the BSO in Washington, DC, and advocating for veterans issues.  “I add a different perspective and add value to the conversation as I get to impact and shape policy.”

Kirsten believes the field of social work is ever evolving, and this is in large part because of the lesson she learned early on at The University of Alabama – it’s all about mindset.  “Follow your heart, and don’t let people put you in a box.  I chose to pursue a PhD because I wanted to open my mind to the world of research.”  Understanding that the military and the VA are a microcosm of society, Kirsten hopes that her research and advocacy with veterans and caregivers will result in more compassion from the larger population and positive changes for both active military and veterans.