A passionate advocate for all human rights, Kennedy Zachery is an undergraduate student in the School of Social Work. At first undecided about her major, it was suggested to Ms. Zachery that she consider social work. With limited knowledge of the profession, it wasn’t until a death in her own family that Ms. Zachery realized the positive impact she could make and the support she could provide as a social worker. “Being black, mental health issues are not really talked about. It is just assumed that we are fine.” 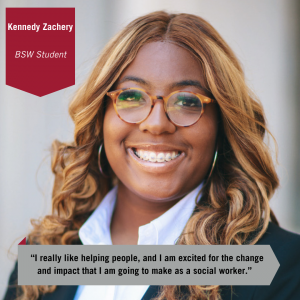 During the pandemic and at the peak of the Black Lives Matter movement, Ms. Zachery was taking the Honors Social Injustice and Oppression course. It was during this class that a fire was lit in her as she began to realize the breadth and impact of racism. As the only black female in her class, she was able to share her perspective and discuss her opinions. As a result of this discourse and her studies within the School of Social Work, she has learned the importance of seeing others’ perspectives – understanding that as a future social worker, the ability to meet people where they are and understand their viewpoints is critical.

Currently, her field placement is at The Turning Point Shelter, where she works with the case manager to help provide services for survivors of domestic violence and sexual assault. Ms. Zachery shared that she really enjoys program implementation and macro-social work. “ I like to do things on a bigger scale to help a lot of people at the same time.”

In the months when Ms. Zachery is not studying or working in her field placement, she is back home in Marietta, Georgia. There she assists her aunt, who owns the non-profit ASDMinistries. The non-profit also hosts an annual back-to-school event that collects donations to distribute school supplies to children in need in honor of her deceased family member who had been Vice Principle at a high school.

When asked which professor has had the greatest impact on her as a student, Kennedy shared that Dr. Sherron Wilkes has truly been an inspiration. Kennedy stated, “It is not often that you get to see black people thriving. Dr. Wilkes is an inspiration of what can be done.”

Empathetic. Compassionate. Advocate. These are just a few of the many words to describe undergraduate student Kennedy Zachery. After her undergraduate degree, Miss Zachery plans on furthering her development by pursuing her master’s at The University of Alabama School of Social Work. Ultimately, Kennedy aspires to apply her studies and experience to eventually become CEO of her own non-profit homeless shelter, where she can provide resources to those with mental health issues. When asked about what she looks forward to most upon graduation, Ms. Zachery responded, “I really like helping people, and I am excited for the change and impact that I am going to make as a social worker.”