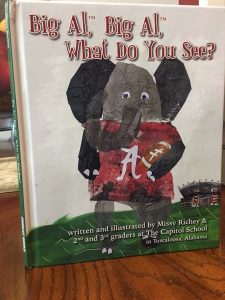 A year ago, Kevin Corcoran became captivated by a newspaper article about a group of young students who wrote their own books about the University of Alabama’s mascot.

Corcoran, a professor in the UA School of Social Work, read a profile in The Tuscaloosa News about how second- and third-grade students from the Capitol School who each wrote their own stories about Big Al, UA’s elephant mascot. Last January, the group of 26 students visited the Paul W. Bryant Museum to read their stories, surrounded by memorabilia of Crimson Tide football.

Every book each student wrote was titled “Big Al, Big Al, What Do You See?,” which chronicled all the different things the mascot would see during a Crimson Tide football game. Each book was written in the style of Eric Carle’s “Brown Bear, Brown Bear, What Do You See?” with one page asking what the main character sees and another page describing what they saw.

“I just thought it was as cute as a bug’s ear,” Corcoran said.

From there, Corcoran contacted Capitol School teacher Missy Richey about publishing a children’s book that would combine the students’ best pictures.

On Tuesday, Richey and the students celebrated the launch of “Big Al, Big Al, What Do You See?” at the Paul W. Bryant Museum. During the afternoon, students signed books for their parents and received a tour of the museum.

Proceeds from book sales will be split evenly between the Capitol School and the School of Social Work. The book is now available at the Capitol School, the museum, The Supe store as well as online at Amazon and Mascot Books, the publisher.

“What I like about it is how there are so many books about Big Al, but they aren’t stories like this,” said Jan Scurlock, a researcher at the museum.

Like “Brown Bear,” the students’ book incorporates art made from tissue paper collages.

“It was really fun, but had some challenging parts,” said Nola Besant, a student who worked on the book. “It was hard to get some of the strips of paper to fit just right.”

To get the students familiar with what the pictures should look like, Richey took the students to A-Day, UA’s spring football game, last year to get a sense for what Alabama football was like.

The game was student Ian Shen’s first time in Bryant-Denny Stadium, or at a football game at all.

“It’s the first game I had seen that wasn’t on a TV screen,” Ian said.

Richey said the idea for the book came from her time in England, where she learned about how some elementary schoolchildren learn subjects by writing short books about them.

“When you’re studying a subject, you do a book on it,” Richey said. “We always want to try and do new and exciting things.”

Richey said she is proud of how her students’ accomplishments could be captured in a book that could be enjoyed by others.

“They are going to be 80 years old and still have this book to look back on,” she said.

Student Nygel Seay said he had fun making the book.

“It was a great opportunity for me and my friends to draw and make a book together,” Nygel said. “I am glad there is a story about Big Al.

How to Buy Big Al, Big Al What Do You See? Email eadykes@sw.ua.edu to learn more.