Alumna Amy B. Mansue, president of the Southern Region of RWJBarnabas Health, has been named chair of the Board of the New Jersey Hospital Association, the state’s oldest and largest hospital and healthcare advocacy organization. She received the appointment in January 2018.

“I am grateful for the opportunity to continue to improve wellness for both individuals and local communities,” said Mansue. “Our 2018 mission statement is to improve the health of the people across the state and as Board Chair of NJHA I look forward to collaborating with other leaders and organizations to concentrate on the societal challenges that impact health in our communities throughout New Jersey.” 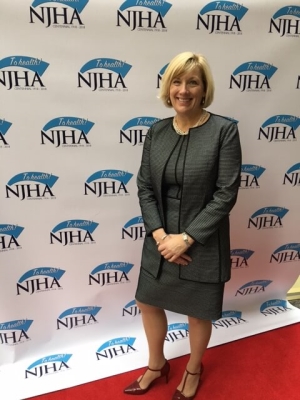 Mansue has public sector experience at both the federal and state level and served as co-chair of the Budget Transition Advisory Committee for Governor Phil Murphy. She worked for Governor Jim Florio as a staffer on healthcare policy in Congress and in his policy office. In 1993, Mansue oversaw programs for children, people with developmental disabilities, mental health and Medicaid as a deputy commissioner in the New Jersey Department of Human Services. She served as deputy chief of staff to Governor James McGreevey.

This article is from RWJBarnabas Health’s website. Read more.