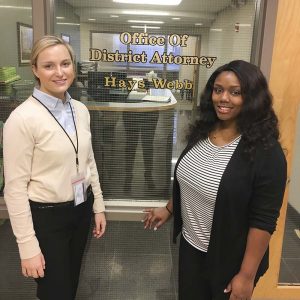 Second-year MSW student Katrena Dale and MSW May graduate Theresa Sprain were victims’ services interns at the Tuscaloosa District Attorney’s office this spring, where they completed individual assessments for victims and helped establish support groups for victims of domestic violence and for mothers and fathers during custody and child support hearings.

“This is a new partnership and part of a larger initiative of integrating social workers into innovative community engagement practicums,” said Joanne Terrell, program coordinator and UA social work instructor. “We started from the ground up – there had never been a successful social work placement at the DA’s office.”

District attorney Hays Webb, who was elected in 2016, and Marilyn Anderson, victims’ services officer, were keen to strengthen the office’s communication and work with victims. Prior to the interns’ arrival, the DA’s office identified and contacted 1,800 victims of felony crimes who hadn’t received correspondence over a number of years, Webb said. Sprain and Dale helped identify 200 additional victims that weren’t identified in the office’s previous efforts. Dale and Sprain also provided additional courtroom support for victims of misdemeanor crimes by assessing victims’ needs, from establishing the first line of communication to connecting victims to services, to better deal with their circumstances.

“When we met in November, we told them they’re not plugging into something that’s already created,” Webb said. “There wasn’t a definitive plan or particular tasks early on, but their benefit was, with a well-running program, they’d get to say ‘we’re the only people who’ve ever started such a program in Tuscaloosa County.’ Their work this spring really helped bolster the work of our victims’ services office.”