“My mother was one of the pioneers of that consent decree at DHR, and that’s what gravitated me toward social work later in my life,” Barber said. “I want to do that in the law enforcement community through social work means.”

Barber’s wide range of work experience, which includes work with at-risk juveniles, can open a variety of career opportunities working with different populations. But his dissertation – a critical analysis of work stressors and support services in law enforcement – positions Barber to serve the law enforcement community itself.

Barber’s dissertation included 20 participants – police officers from nine different departments between two counties in Alabama. Barber surveyed the officers about their attitudes toward the landscape of mental health services provided by their department, particularly counseling. He found that 85 percent of the participants favored mandated counseling for all officers. Currently, officers must request counseling, but they’re hesitant to ask for help for fear of discrimination, Barber said. 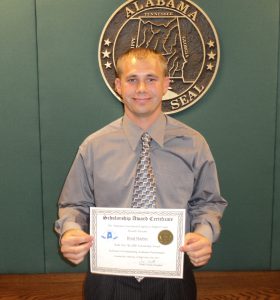 “Officers fear that, if they ask for counseling, a supervisor might think they’re unfit for duty,” Barber said. “They also don’t want to look weak in front of coworkers, so an across-the-board policy would eliminate that fear.

“I’ve experienced this personally. I have a PhD now, but if I have a problem, I’m still hesitant to go to a counselor.”

Integrated mental health services are rare in small law enforcement agencies, Barber said. Larger agencies rely on administration, like the police chief, to help connect an officer with a counselor, but officers “don’t want to sit down and have that conversation” with their boss. Some agencies have an Employee Assistance Program, a catch-all of services, but three of the four study participants who had an EAP option “didn’t trust it,” Barber said.

“Most police officers will agree: 95 percent of the stress comes from the administration, not from working the streets,” Barber said. “From incompetent supervisors to a lack of resources, the list goes on and on.”

“I support that idea,” Barber said. “If a counselor had to do a ride-along before they counseled the officers, more officers would feel comfortable talking to them.”

Barber will become vested in the state retirement system on Sept. 1 and will then begin weighing his career options.