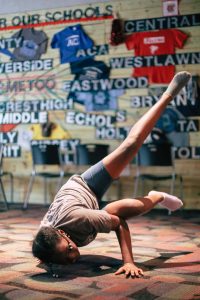 Alexi Bolton isn’t yet sure of her postgraduate future – she’ll receive bachelor’s degrees in social work and marketing in May 2019 – nor does she know what will become of her “baby,” Inspired Arts, a free arts camp for children she created in 2015 in her hometown of Madison.

“I’ve been working on Inspired Arts since I was in high school,” Bolton said. “It’s a huge part of my life that, if we end up not doing it, will be gone.”

When the third edition of Inspired Arts wrapped up in July 2018, it had served 135 students between both Madison and Tuscaloosa, where Bolton held her first camp in June 2018. After three years of using musical theater, drama, dance and art to unearth creativity and positivity in children, she’s discovered firsthand the wisdom elders often impart to youth: do what you love.

“What I’ve learned from running Inspired Arts is I don’t want to ever be working on a project or for a company that I don’t feel like is making an impact on the world,” Bolton said. “What drives me is being able to make someone’s life better. That’s really important to have learned so early, and it saves me a lot of time in applying for jobs.”

It Takes a Village

As the African proverb says, it takes a village to raise a child, and Bolton’s village is growing. 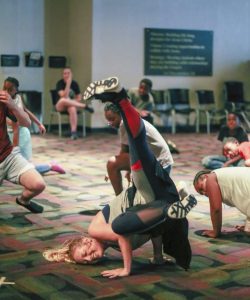 “I was home in Madison recently, and I had people coming up to me asking to volunteer,” she said. “It’s incredible. It shows we’ve taught and helped other students do something they’re passionate about, and to give back to the community.”

Bolton found campers through one of her professors, Dr. Tania Alameda-Lawson, associate professor of social work at UA and director of Alabama TOPS, an out-of-school research program in Holt. UA students like Amelia Volpe and Jamie McKelvy joined and taught classes, and First United Methodist Church offered its grounds for classes and performances.High school and college students with backgrounds in various arts power the Inspired Arts staff each year. The Madison edition of the camp also has established connections with restaurants and dance studios. Bolton’s ambition to start a camp this year in Tuscaloosa meant working the phones for meal and venue sponsors, camp instructors and participants.

During the second week of June, Bolton and her staff taught a variety of poems, songs and dances, from hip hop-inspired themes to a ballet rendition of “Swan Lake.” The week concluded with a performance for friends and family.

McKelvy, a UA engineering master’s student from Huntsville, knew Bolton through the Wesley Foundation ministry at UA. A former member of the Million Dollar Band, he plays the ukulele and had previously taught music at a youth camp in Hartselle. While Bolton’s pitch to him was an easy sell, McKelvy said he was unsure what to expect because he didn’t know the kids or their previous experiences in music. But in teaching harmony, melody and rhythm, the children surprisingly gravitated toward learning chords, which require a greater level of focus and listening, McKelvy said. 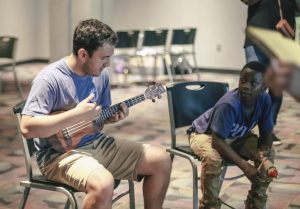 “It’s hard for kids to stay focused for that,” McKelvy said. “But then they asked to do it the rest of the week. And once they knew I could play other instruments, they’d ask me to show them. They really enjoyed that.

“Music is one way to create kindness and joy, and it’s a positive effect on growth for the potential for people around you.”